31 Days Of Space: The Spooky Frontier – Planet Of The Vampires 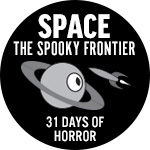 Interplanetary ships the Galliott and the Argos receive a distress call on an uncharted planet. Both ships decide to land and investigate but as the crew of the Argos passes through the planet’s foggy atmosphere they suddenly become possessed with a murderous lust and try to kill each other. Fortunately Captain Mark Markary (Barry Sullivan) has the awesome will to resist and manages to snap his crew out of their bloodlust and land the ship safely.

Unfortunately they’ve lost contact with the Galliott. When they find the Galliott, the crew is all dead having murdered each other. When the Argos crew go to get supplies to open the Galliott’s bridge they find all the dead bodies missing. Soon members of the Argos are getting killed and dead seem to be walking around!

Captain Markary and two other crew members go exploring the planet and discover a derelict space ship. Inside is the mummified corpse of a giant alien still at the controls of the ship. They realize that the distress call that brought them to the planet also brought this ship. The inhabitants of the planet want off and are trying to hitch a ride with whoever comes to the distress call. These aliens posses the dead and what’s left of the crew of the Argos needs to get off the planet before they’re next.

The real title for this 1965 Italy made sci-fi horror is Terrore nello spazio which translates into Terror in space which is a better title for this movie. There are no vampires in the film just corpse possessing aliens. The movie was a co-production between American International Pictures and Italian International Film. Master horror filmmaker Mario Bava directed an international cast on a very low budget but managed to create a pretty eerie movie with a cheap set (they reused the same two rocks over and over again) and a lot of smoke and fog. It feels like some scenes and the plot inspired Ridley Scott’s Alien and while it doesn’t match up to that film this is still a pretty good sci-fi horror.