It’s winter and the snow is falling. A blizzard is upon the town of Pontypool, Ontario and shock jock radio personality Grant Mazzy (Stephen McHattie) is on his way to work. While stopped Mazzy has a woman smack against his car window repeating the word blood over and over.

Mazzy makes it into the radio station and gets to work. His co-workers technical assistant Laurel-Ann Drummond (Georgina Reilly) and station manager Sydney Briar (Lisa Houle) are the only other people at the station. Things move along like normal until Grant contacts the station’s helicopter reporter Ken Loney (Rick Roberts) who reports a group of people attacking other people. He is cut off and Grant and the rest of the station are shocked. 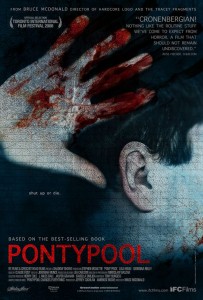 When Ken calls back the station but the transmission is interrupted by a transmission in French. The translated message gives out instructions to remain indoors, not to use terms of endearment, or the English language. There is a virus outbreak turning people into zombie like creatures but it spreads through language. The victims will start saying a single word in English over and over until they turn and need to infect someone else.

Grant, Laurel-Ann and Sydney finds themselves trapped in the radio station and soon Laurel-Ann starts repeating the word “missing”. Then things start getting intense. Directed by Bruce McDonald and based on the novel Pontypool Changes Everything by Tony Burgess this low budget horror is quiet, intense thriller that slowly builds the tension.