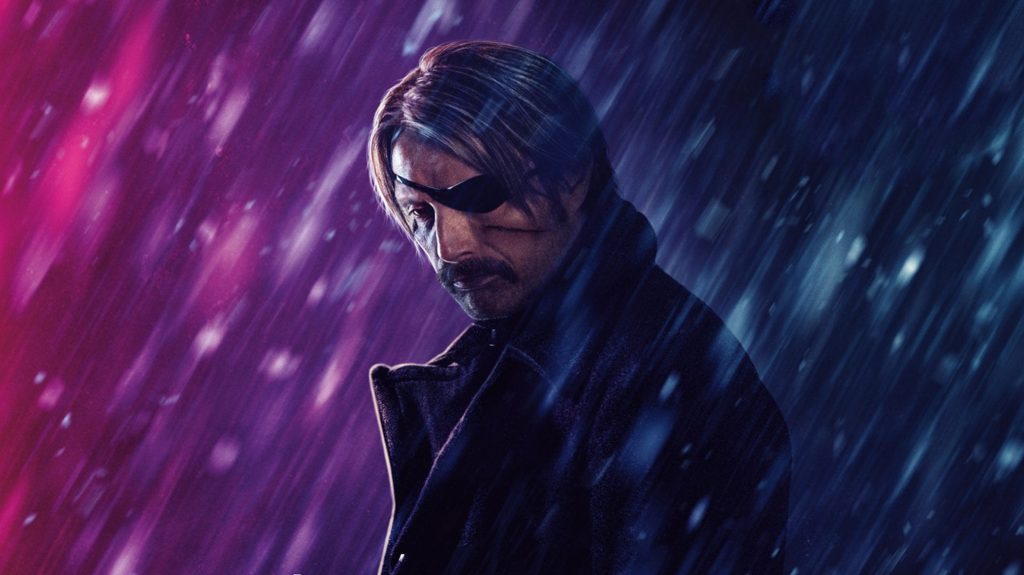 Mads Mikkelsen is Duncan Vizla a.k.a. the Black Kaiser in Polar.

Odds are you will come across a number of articles comparing Polar to John Wick. Pay no attention to them. Sure, they both revolve around (relatively) honorable hired guns whose employers turn against them, but the similarities end there. One loves dogs, the other one… you’ll find out.

Based on the graphic novel by Victor Santos, Polar revolves around Duncan Vizla a.k.a. the Black Kaiser (Mads Mikkelsen). An accomplished hitman, Vizla is looking forward to his retirement, just days away. His plans come undone when the corporation that employs him would rather take him than pay him severance. The assassin doesn’t take the attempts on his life kindly and plans to take his grievances to the top.

If John Wick mopes the entire movie, the Black Kaiser is not above enjoying hard liquor or a roll in the hay, even if his companion has murder in her mind. He does however have a couple of regrets that reverberate throughout the film.

Directed by Jonas Åkerlund, responsible of countless iconic music videos for Madonna (“Ray of Light”), Beyonce (“Lemonade”) and Jamiroquai (the brilliant “Canned Heat”), bites into the material gleefully. Blood? There are gallons of it. Torture? In detail. Insolence? You have no idea. And yet, it’s all made with such joy, one can’t hold it against him.

Mads Mikkelsen portrays Duncan Vizla as a working stiff at odds with The Man (I’ve been there). The Danish actor is perfect for the part, but is he ever not. Worth remembering, Mikkelsen turned the world’s most ruthless cannibal into an antihero fans rooted for and still pray for his return.

Mikkelsen has managed to escape the shade of Hannibal by popping up in the Star Wars saga and the Marvel Cinematic Universe, not to mention his work in his native Denmark (The Hunt, Men & Chicken). He called from New York to talk Polar.

– How do you relate to a character like the Black Kaiser?

– The Black Kaiser is part of a graphic novel. Growing up, being 7, 8, 9 years-old, a lot of us flew into those universes and imagine how cool would it be to be such a cool character. I like him, he is socially awkward, but he is a very good hitman. He doesn’t have any moral qualms about it. It’s his job: Some people cut hair, he kills people.

– Your character’s movements are very economical, particularly when fighting. How did you and Jonas zeroed in on that style?

– We wanted Duncan to be fit, lethal, but not a bodybuilder, or full of energy for that matter, especially after being tortured. He is almost dying every time a new guy (henchman) shows up. We wanted a sloppy fight, so we tried to make the takes as long as we could, shot them from different angles and get some energy out of that. It looks more brutal.

– You’re credited as executive producer of Polar, I believe your first time. What that entitled and did it take you outside your comfort zone?

– I wasn’t aware I was an executive producer until the last day of shooting. It’s a negotiation thing that works over here (in America). I was very much invited in the script phase, casting, etcetera, and enjoyed that tremendously. I’m often invited in when I do Danish stuff, but this is my first time in an American film.

– You share a scene with Richard Dreyfuss and you were about 12 years-old when Jaws came out. Did it ever cross your mind “OMG, I’m working with the guy from Jaws”?

– The second he said yes we were all like “we got Richard Dreyfuss! This is insane!” There was a lot of fanboy mentality from all of us. He starts his scene singing karaoke in the worst possible manner. He is just a lovely, lovely man and a fantastic actor.

– There are four more books in the Polar universe. I know not all of them have Duncan as the main character, but are you planning to push forward or is this a one-off?

– It started out as a one-off and we wanted it that way. We wanted it to be a solid film that could stand by itself. Once we figured out the ending, we realized there was an opportunity for another one. It came naturally. Let’s put it this way, if people like this one, if they push that button, there may be a second one.

Polar is now playing on Netflix.