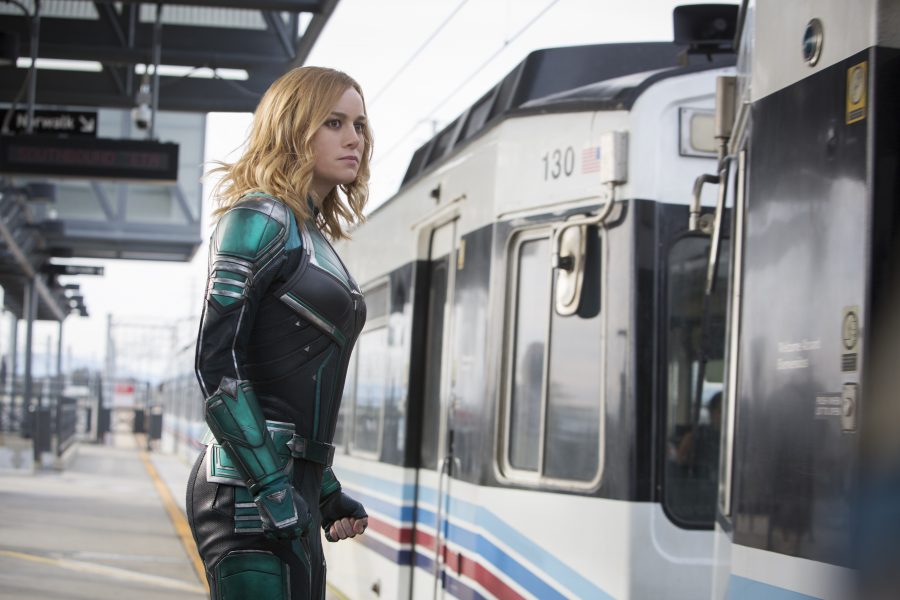 Writer’s note: Much like with the all-female reboot of Ghostbusters, Captain Marvel has found pushback from the darkest, redest corners of the Internet. I wouldn’t normally be troubled by trolls or James Woods (I know, same thing), but some may bunch together less-than-glowing reviews with the rambles of individuals that feel threatened by Brie Larson’s activism or the idea of a feminist superhero. My critique is focused on the film exclusively and external considerations have no weight in my analysis.

Captain Marvel has a tall order to fill: It must bridge the cataclysmic events of Avengers: Infinity War with Avengers: Endgame and has to establish a hero not only capable of going head-to-head with Thanos, but also lead the super-team into a post Iron-Man era.

I’m here to tell you the film does complete the task, but doesn’t excel at it. Captain Marvel is a functional popcorn flick without much of an identity outside being proudly feminist. It’s surprisingly drab-looking for a Marvel Studios movie and the action sequences are perfunctory at best. The performances –not the plot– carry the film, a rarity for this universe.

We first encounter the hero of the piece, Vers (Brie Larson), fighting alongside the Kree against the Skrulls, presumed terrorists that are also shapeshifters. Her team of super-soldiers is led by Yon-Rogg (Jude Law), a charismatic veteran who struggles to keep his star pupil under control. Vers has no memory of her past, outside snippets of what seems to be a life on Earth.

The hero’s encounter with the Skrulls shakes up her old noggin and sends Vers back to Earth, where she establishes a quick alliance with a young Nick Fury (digitally de-aged Samuel L. Jackson). In her efforts to figure out what the extremists are up to, Vers finds some clues about her origins, including her terrestrial name: Carol Danvers.

There is a fair amount of information I rather not spoil. I shall mention though that Captain Marvel trades on two fairly recognizable plot threads: One person’s terrorists are someone else’s freedom fighters and the comfort of accepted knowledge often hides unpleasant truths. There is a lot of sci-fi in the film. Not hard sci-fi, just a lot of it.

While noticeable out of their element, indie stalwarts Anna Boden and Ryan Fleck (It’s Kind of a Funny Story, Half Nelson) recognize the easy rapport between Brie Larson and Samuel L. Jackson is their best asset (they regularly end up front and center). Jackson’s digital rejuvenation is remarkable. One wishes the same care would have been put on Clark Gregg’s Agent Coulson: Dyed eyebrows just don’t cut it.

Another coup is Ben Mendelsohn, with whom Boden and Fleck worked with in the criminally underseen Mississippi Grind. Mendelsohn starts the film as yet another menacing authority figure (as in Rogue One, Robin Hood, Ready Player One…), but loosens up along the way and becomes delightful.

Character-wise, Carol Danvers/Captain Marvel is basically a collection of noble and antisocial traits that applies to half the Avengers. While Brie Larson owns the role, it lacks some color, some idiosyncrasies that would make the character unique, outside her electric fists. Something like Nick Fury’s cat-crazy side.

I’m aware asking for subtlety to a superhero movie is an oxymoron, yet the hackneyed way Captain Marvel forces 90’s sounds and sights is a notch off-putting. Like Gwen Stefani belting “Just a Girl” as Carol/Vers wipes the floor with her enemies. We get it, she is powerful, she is angry, No Doubt is huge.

It pains me to do this, but two-and-a-half planets for you, Captain Marvel. We need you to be better (yes, I realize I’m addressing a fictitious character).