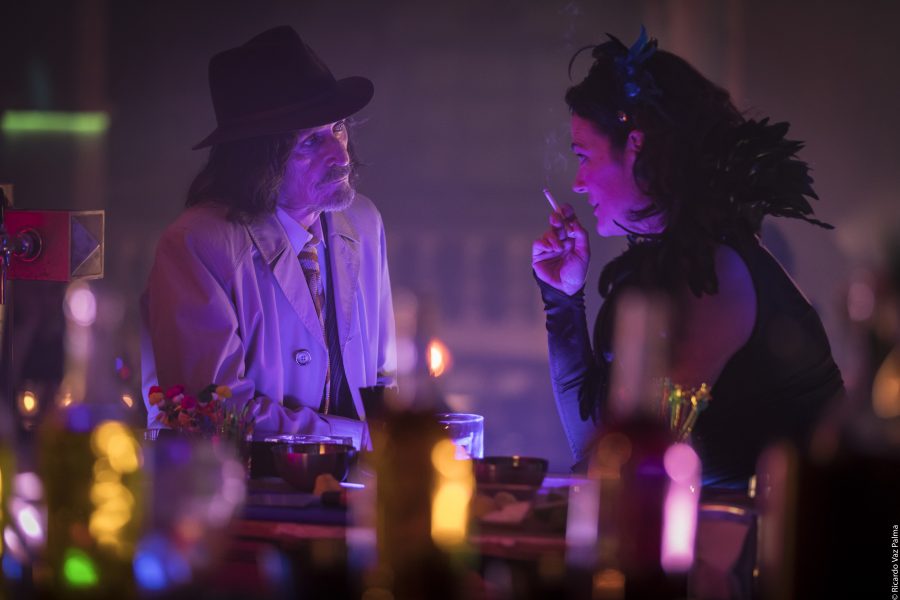 Twelve years ago, Pontypool pulled the rarest of feats. It was original for a zombie movie and intrinsically Canadian (the disease was transmitted via language). Something you may not have noticed is that there was a post-credit scene, featuring the leads as different characters: Johnny Deadeyes and Lisa the Killer, two shady types looking for adventure. I completely missed that until re-watching it for this review.

The promise of the little-seen sequence is fulfilled in Dreamland. Director Bruce McDonald reassembles the Pontypool crew (actors Stephen McHattie and Lisa Houle, scriptwriter Tony Burgess) plus a couple of ringers (Henry Rollins and Juliette Lewis) for a surrealistic noir. Not Twin Peaks-bonkers levels, but pleasantly weird.

McHattie pulls double duty as the aforementioned Johnny and as a drug-addled trumpet player known as The Maestro (the connection is never quite explored). Johnny is an assassin working for a local gangster named Hercules (Rollins), owner of the seediest bar in the city. Hercules plans to start catering to pedophiles, not what Johnny signed up for.

Meanwhile, a couple of blocks away, The Maestro prepares to play at a the lush wedding of a vampire and his underage bride. Their stories are bound to intersect. Violently.

A solid storyteller with a penchant for the unusual, Bruce McDonald keeps Dreamland from veering too far into the incomprehensible, although he allows one too many pointless monologues in. The film is at its best when McDonald lets the characters loose and bounce from each other. The interactions between no-good Hercules and the vampire shouldn’t be this entertaining. There’s a bit of social criticism, but it’s too broad to register

But Dreamland is Stephen McHattie’s movie and he puts on a show. While Johnny Deadeyes is the most compelling character of the two (the badass with a moral compass, a noir staple), as the musician, McHattie delivers a haunting rendition of “I saved the world today” reminiscent of Chet Baker. In fact, the whole Maestro persona has been moulded after the jazz legend.

There is a lot in Dreamland to keep you interested: The locations in Belgium and Luxembourg add an extra layer of surrealism to the proceedings, Rollins and Lewis add unexpected vulnerability to their live-wire personas. I just don’t think these elements add to much.

Having said that, Dreamland has grown on me. It’s not an unusual phenomenon with Bruce McDonald’s movies: I wasn’t that impressed with This Movie Is Broken and Hard Core Logo 2 the first time I saw them, yet to this day, I still remember them. Three heat-packing planets (out of five).

Dreamland is now available on demand in most platforms.