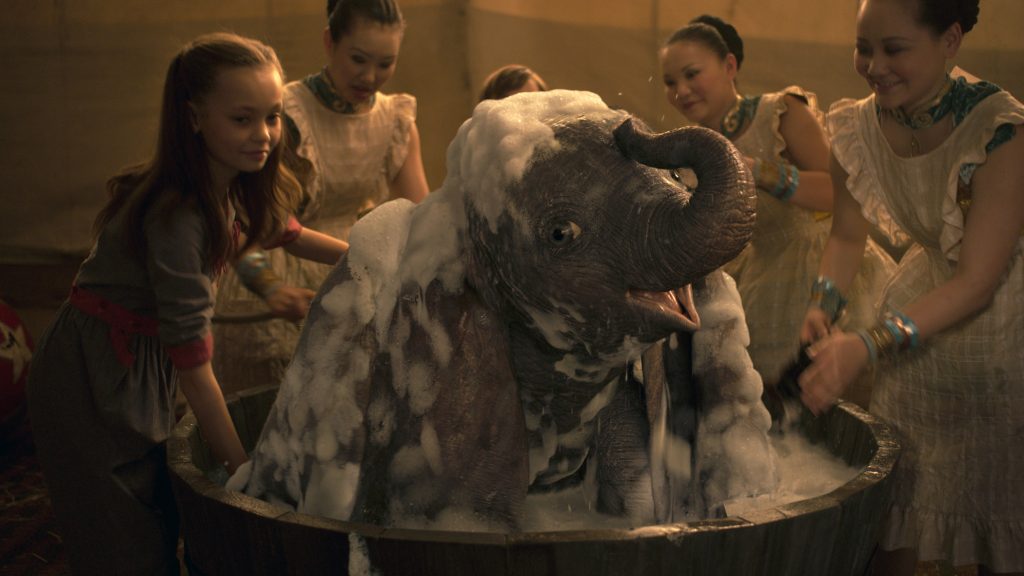 It’s no news to anybody Tim Burton’s films are hit or miss. I happen to appreciate some of his less celebrated work (Mars Attacks, Dark Shadows) and have no patience for some of his big hits (Alice in Wonderland, Big Fish). Dumbo sits somewhere in the middle, two thirds a sentimental triumph, one third an undercooked heist that would be more at home in a Michael Bay movie.

A more “realistic” take on the 1941 Disney classic, this Dumbo doesn’t have anthropomorphized animals (although all of them cameo or are referenced to, even those controversial crows). The story is driven by humans, specifically the Farrier family. The father, Holt (Colin Farrell), has returned from the war maimed and his spirit shattered. His kids have been forced to mature earlier than they should, while sheltered by the circus community. The three of them reconnect over a baby elephant with freakishly large ears.

Dumbo goes from pariah to main attraction the moment he starts using his ears to take flight. The act attracts the attention of a circus mogul (Michael Keaton), who claims to be an artist at heart, but turns out to be another greedy capitalist who Zuckerbergs everybody.There is a kernel of tragedy embedded in Dumbo’s story that makes it instantly compelling. Much in Tim Burton’s wheelhouse, the elephant is an outsider, separated from his support system (his mother), depending on the kindness of a few in a hostile environment. This portion of the film works like gangbusters: Farrell brings the melancholia and Danny DeVito (as the circus owner) his trademark sliminess.

Then comes the fallout. The reunion of Tim Burton with Michael Keaton doesn’t deliver the fireworks expected. In fact, all the explosions take place during an action-packed ending that forgets all the solid character work that precede it.

Burton hasn’t lost his touch and Dumbo is an amiable family flick. Just be aware they both can do better. Three planets.