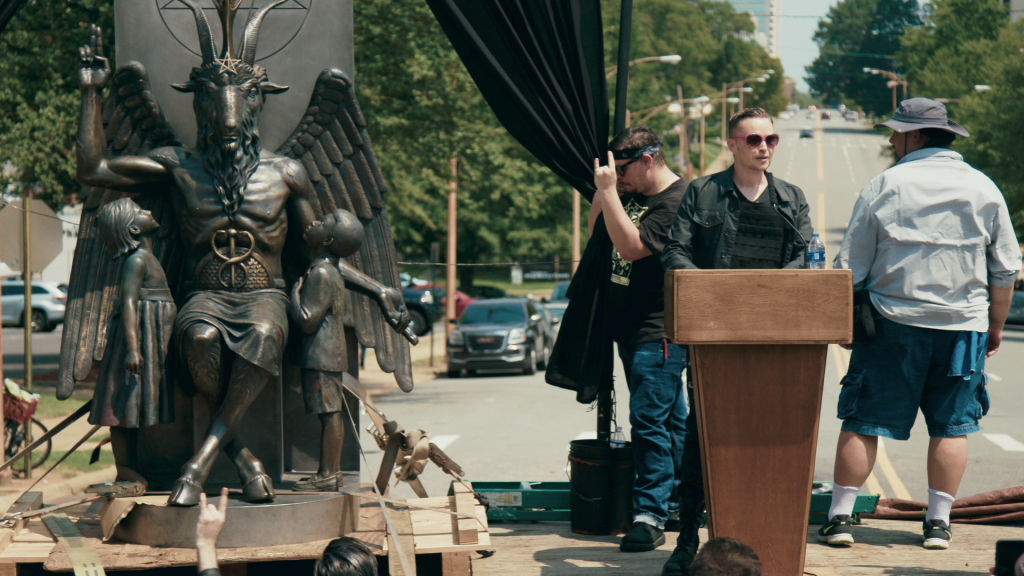 It’s not a good sign for the Christian right when admitted Satanists come across as more likeable and reasonable than they do. I’m not even talking about those Westboro Baptist Church freaks, but zealots advocating for the reunification of church and state.

Hail Satan? is not your standard doc denouncing satanic practices as it was so fashionable a couple of decades ago. The film instead focuses on recent challenges to freedom of religion in the United States.

The institution at the center of the movie is the Satanic Temple, a fast growing movement close to reaching all continents, but struggling with their success. Imagine trying to shape an organization founded on anarchic principles. Interestingly, the members interviewed for the documentary don’t believe in Satan. They are anti-religion: Black mass is not an invocation, but a repudiation of traditional rituals.

The wave of conservatism down the border (and here, sadly) gives the Satanic Temple a purpose: To receive the same treatment any other creed would. Key to their success is their open-door policy: If in the past similar groups operated in the shadows, now they have outreach programs (the after-school Satan Club comes to mind). They also have a sense of humor: Pronouncing Fred Phelps’ mother gay long after her death is certainly worth a laugh.

From a legal perspective, the Satanists’ mission tracks: The US was born a secular state, which gives all religions equal footing. This doesn’t sit well with plenty of political figures, further irked by the Satanic Temple’s request to be included in the Phoenix’ City Council prayer rotation. Satanists up the ante by demanding a statue of Baphomet be placed next to the Ten Commandments in name of equality. They have a strong case.

Hail Satan? doesn’t go out of its way to present the Satanic Temple in a positive light, but by comparison they seem like a paragon of civility next to the hostile crowds surrounding Planned Parenthood clinics. The doc, however, falters at both ends. The opening anecdote (the Satanic Temple hiring a Richard E. Grant-lookalike to front the organization for a single occasion) leads to nothing and is not addressed again.

The problem with the conclusion is a classic documentary issue: When the situation is ongoing, how do you end the movie? Director Penny Lane (Nuts!) opts for an ostensible copout and it’s hard not to be disappointed. Still, Hail Satan? has plenty of good points to make, like comparing the 80’s and 90’s witch hunts that got metalheads and goth kids disenfranchised and sent the West Memphis three to jail, while the Boston diocese was getting away with widespread abuse. Just saying’. 3/5 horned planets.