Harlan Ellison passed away last week and while he worked a lot in television a couple of his stories made it to the big screen.

Don Johnson stars as Vic. A young man wandering through a post apocalyptic world with a telephic dog named Blood. Vic and Blood go around searching for food and women. 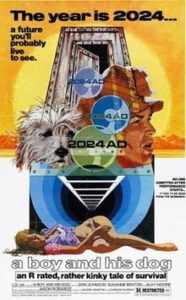 All Vic cares about is food and sex. All Blood wants is food. The two have a love hate relationship. They steal and avoid bands of marauders, mutants and androids. While tracking a woman Vic and Blood are lead to an underground society where they are the lured becuae the leaders want Vic to help repopulate their society.

Based on Ellison novella the movie was made independently and he started writing the screenplay but got writer’s block half through. The movie wasn’t a success but has gained a large cult following over the years.