The movie was a biographical if somewhat streamlined, comedic, violent and action packed version of notorious outlaws Bonnie Parker (Faye Dunaway) and Clyde Barker (Warren Beatty). The movie takes some liberties with the actual events but it’s an awesome and entertaining movie. 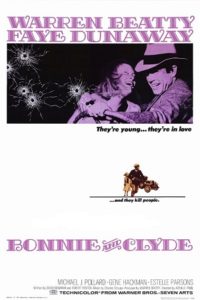 The movie starts with Clyde meeting Bonnie while trying to steal her mother’s car. The two of them soon become partners in crime. They start off small time but slowly start working up to robbing banks. They recruit a young gas station worker named C.W. Moss (Michael J. Pollard), in real life the character is an amalgamation of a couple of people who worked with the Barrow gang, to be their driver. Eventually they team up with Clyde’s brother Buck (Gene Hackman) and his wife, Blanche (Estelle Parsons). They soon become extremely wanted criminals as they crimes get more and more violent.

It took several years for Bonnie and Clyde to get made. The writers shopped it around trying to get a director on board (at one point Jean-Luc Godard was approached). Eventually Warren Beatty became involved and he got Arthur Penn to direct. Warner Bros. was unhappy with the film and were eventually forced to give the film a wide release. The film became a huge hit for them and a critical one too. The movie won two Oscars and was nominated for 8 more awards.