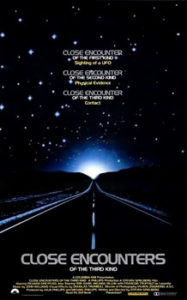 An international group has running all over the globe finding strange phenomenon. A squadron of planes, sans the pilots found in the desert perfectly intact except they went missing during WWII. In a different desert a lost cargo ship. In India a village all sing the same song/tone.

Meanwhile in the U.S. U.F.O. sightings have increased. a near miss with airplanes. Indiana electrical lineman Roy Neary (Richard Dreyfuss) has a close encounter himself one night while working and ends becoming obsessed with an object that the U.F.O. may have put into his head. It starts to drive a wedge between him and his wife and family. Eventually the pieces start falling in together.

The movie is excellent. And like I said before in this issue’s Hnetflix, they don’t make movies like this anymore. There is no bad guy, no action scenes, no explosions. The special effects are used to create wonder and amazement. The movie is thrilling without any antagonist. It creates a bit of fear of the unknown but there is no evil government bad guy with his own agenda and the aliens aren’t evil or malicious. When I think about it they don’t really make movies to create wonder anymore.

Close Encounters of the Third Kind was overshadowed a little by Star Wars when it came out but it still was pretty successful and over the years Spielberg would redit the movie more to his liking and it would get re-released a couple of times in theatres over the years. With all the dreck playing right now it’s return to screens is a welcome break.