In the final film of the series our “hero” Haruo finds himself on trial from the remaining Bilusaludo for killing MechaGodzilla city and thus killing all the Bilusaludo who merged with the nanometal in the last film. This act also essentially killed Haruo’s girlfriend Yuko who was partially merrged with the nanometal and has now been left brain dead. The remaining humans disagree with the trial saying that Haruo’s actions exposed the Bilusaludo’s intent to assimilate the Earth.

Meanwhile Haruo starts a relationship with Maina. He also discovers that the Exif, Methphies wants to bring the Exifs god to Earth to defeat Godzilla. Methphies starts converting the surviving humans into a cult worshiping his god. The Exif on the Aratrum (the spaceship carrying the last remaining humans) also begin gathering followers. 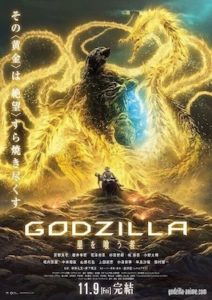 Eventually the Exif get enough followers that they sacrifice them to bring their god King Ghidorah through a black hole from another dimension and it attacks Godzilla after destroying the Aratrum. What ensues is a twenty minute hug feast as Godzilla is unable to attack Ghidorah because the beast is intangible while Ghidorah bites Godzilla and drains his life force. For a giant monster fight it’s very very boring.

While that is happening Haruo goes to confront Methphies who engages in a psychic mind battle. The tribe on Earth also worship a god which is an egg named Mothra and they use Mothra’s telepathy to tell Haruo how to defeat Ghidorah. Haruo discovers that Methphies has been behind everything since the first film, orchestrating the shuttle blowing up back in space when they were looking for a planet to live on and he implanted the idea of how to defeat Godzilla in Haruo leading him to convince everyone to go back to Earth.

Methphies picked Haruo because of his insane hatred of Godzilla. Naturally Harou defeats Methphies and Ghidorah is sent away and Godzilla is left alive and wandering the Earth while the remaining humans move in the with the tribe folk. There’s a little more but after all that the film series really just fizzles out.

I don’t mind trying something different with Godzilla but I think there are expectations for the character. After 34 films Godzilla could use a new take but these three films weren’t it.