An old mansion in the country is getting ready for some guests for a special night. What makes the night so special is that there is going to be a murder and the guests are the greatest detectives in the world.

Written by Neil Simon and directed by Robert Moore this comedy pokes fun at the classic detective mystery. From the opening credits drawn by Charles Addams (whose art is also the movie poster) the film has a macabre but fun sense of humour. The blind butler Alec Guinness tries to get things ready for the guests while dealing with a deaf mute cook, Nancy Walker. Soon the guests start to arrive. 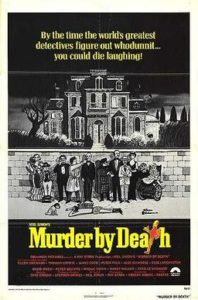 First is Peter Sellers who is a spoof on Charlie Chan with his number three adopted son Richard Narita. David Niven and Maggie Smith are spoofs of Nick and Nora Charles from the Thin Man stories. Peter Falk and Eileen Brennan are spoofs of Sam Spade and his secretary. James Coco is a spoof of Hercule Poirot and Elsa Lanchester is Miss Marples.

Their host is Lionel Twain (Truman Capote) who has summoned them all to solve a murder and a wager that their host is a better detective than all of them. They decide to stay in the dinning room but soon dead bodies start to pile up through out the house.