Det. Sgt. Walter Brown (Charles McGraw) is assigned to escort a late mob boss’ wife by train from Chicago to L.A. so she can testify to the Grand Jury in a case. The widow Mrs. Frankie Neall (Marie Windsor) is attacked before they get to the train and Brown’s partner is killed. The hitman Densel (Peter Virgo) escapes. Brown is ticked but continues with the job. On the train he meets the lovely Ann Sinclair (Jacqueline White) and her son. Meanwhile two more assassins have boarded the train and looking to finish the job. 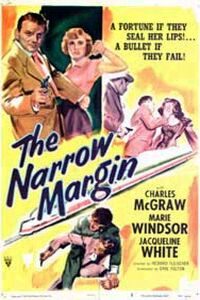 The tension builds as Brown tries to stop the killers. Then there’s a big plot twist but I’m not going to reveal it, it’s more fun to watch.

The Narrow Margin was a pretty low budget thriller from director Richard Fleischer but he and the cast of unknowns manage to keep things tense and claustrophobic. The movie did pretty good when it was released back in 1952 and it got an Oscar nomination for Best Screenplay.

In 1990 The Narrow Margin got a mediocre remake starring Gene Hackman. It’s OK with Hackman protecting Anne Archer on a train through Canada but it’s pretty weak compared to the original.