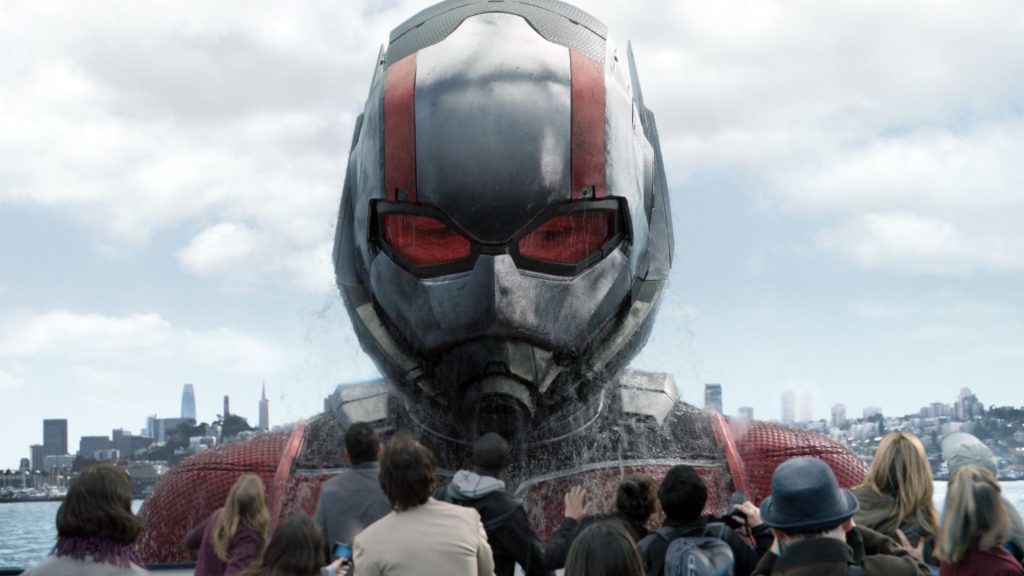 The solemnity of Avengers: Infinity War didn’t quite hit me until the first few minutes of the frothy Ant-Man and the Wasp. A sequel to 2015 Ant-Man (the one Edgar Wright got bumped from), this chapter leans heavily on the comedy and well-designed set-pieces based on… size proportion. The film stands by itself for far longer than expected –given certain events in the MCU– and the limited stakes are a welcome respite from Thanos’ idea of redistribution.

Probably because of the absence of drama behind the scenes, Ant-Man and the Wasp is a lot more cohesive than the first episode. Returning director Peyton Reed and a team of five scriptwriters fail to fully grasp the whole subatomic shrinking business, but your tolerance for science-speak is rewarded in different ways.

Following the events in Captain America: Civil War, the titular Ant-Man, Scott Lang (Paul Rudd), has abandoned his career as a superhero and now endures a two-year house arrest sentence. Scott is willing to bide his time for his daughter, but is also fully aware his actions have forced his former companions –Dr. Hank Pym (Michael Douglas) and Hope Van Dyne (Evangeline Lilly)– to go on the lam. END_OF_DOCUMENT_TOKEN_TO_BE_REPLACED

As high as Marvel’s batting average is, there is a ceiling the MCU movies struggle to break through. Outside the first Iron Man, Captain America: The Winter Soldier and Spider-Man: Homecoming, Marvel has had a hard time generating stakes. Sure, the MCU movies are a guaranteed good time (especially when compared to the DCEU), but I can’t say I’ve been all that invested in the wellbeing of the people of Sokovia, Xandar or New York.

The lack of emotional weight rears its head again in Thor: Ragnarok, but the movie makes up for it with charm and laughs. Far and away the best movie about the God of Thunder and the funniest comedy of the year not involving Stalin, the third Thor movie benefits greatly from having Taika Waititi (What We Do in the Shadows) at the helm. Waititi understands the character better than his predecessors, brings his dry, sharp comic sensibility to the table and makes the most of Chris Hemsworth’s considerable comedy chops. END_OF_DOCUMENT_TOKEN_TO_BE_REPLACED

After conquering with relative ease the earthly and interstellar realms, it’s time for Marvel to get mystical. The most obvious way to enter the most otherworldly of planes is through Doctor Strange, the only character of the ethereal branch to break into the popular subconscious (with the possible exception of Ghost Rider).

At first sight, Doctor Strange appears to be a risky bet for Marvel. The film is loaded with comic book arcana and introduces -quite literally- a whole new universe with its own rules and characters. Furthermore, Strange’s ties to the Avengers and their baggage are very limited, at least at this stage.

It is, however, a calculated risk. Strange follows the Marvel formula to a tee (Strange’s likeness to Tony Stark is particularly on the nose), and for safety’s sake, nearly every plot point but one has been leaked to the public. There are so few surprises in Doctor Strange, it feels like a rerun. END_OF_DOCUMENT_TOKEN_TO_BE_REPLACED