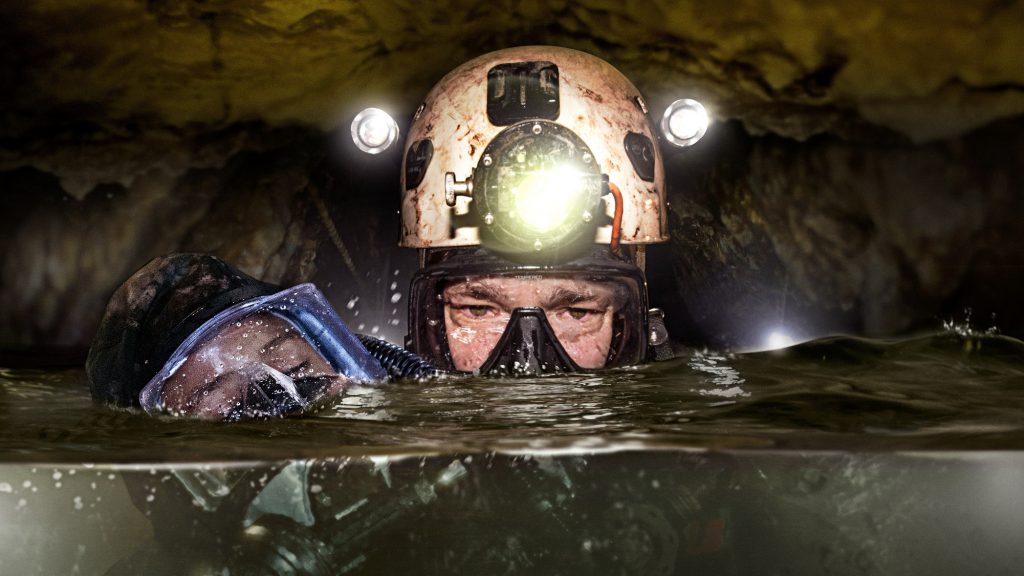 It’s probably still in the back of your mind. In June 2018, a children soccer team and their coach were trapped inside a cave in Thailand after monsoon rains flooded the exit. The event mobilized dozens of volunteers, including local and foreign divers, American forces and even Elon Musk (if only to provide an impractical solution and then harass a volunteer). The situation seems ready-made for a feature.

Lo and behold, here it is, less than two years since the rescue effort.

Cave Rescue is the kind of movie produced in a rush to take advantage of recent events while still fresh in people’s minds: Undercooked, underwhelming and with an inflated sense of self.

The film dedicates precious little time to how the kids ended up in the cave and rather focus on the rescue efforts (a mildly competent filmmaker would have spent time establishing the children as characters to raise the stakes. Not the case here). People pop up in and out of screen: American military personnel issuing obvious orders, farmers happy to sacrifice their crops to save the boys, interchangeable divers looking busy and a religious figure embodying the spiritual aspect of the rescue. Why not.

The main figure in this re-enactment is Jim Warny, an Irish diver playing himself. Cave Rescue makes the bizarre decision of following Warny’s journey from Ireland to Thailand, including the layovers. As remarkable as his role was in the operation, the diver is not particularly charismatic and hanging the movie on him seems ill-conceived. In fact, the guy who provided the turbo pumps that prevented the kids from drowning is effortlessly compelling and the movie suffers once he’s sidelined

In addition to shooting the official, government-approved version of the events, Cave Rescue makes two glaring mistakes that end up sinking the endeavor: It sacrifices character development for “plot” sake and focuses on the events outside the cave rather than inside.

Cave Rescue provides no conflict or fresh insight. The closest the film gets to criticize the authorities is the faintest condemnation to the local bureaucratic process. The rest of the time the movie is complementary of the government to a fault, down to restaging the visit of Thailand’s Prime Minister to the rescue camp.

One could venture the absence of checks and balances allowed this to happen. Tom Waller directed, produced and co-wrote Cave Rescue. It has “passion project” written all over.

As established, the film’s problems are numerous and easy to spot (the rescue itself is difficult to follow and not at all thrilling), but if you need some kind of reassurance regarding mankind’s inherent goodness in this trying season, Cave Rescue may just do the trick. One and a half planets.

Cave Rescue will be available in VOD on April 3rd.